The North York Knights Novice Black Select recently entered the Stoney Creek Tournament of Champions held between November 9th and 11th in the A Division.  The road to the championship began on Friday morning when the Knights faced the Lorne Park Clarkson Wild from the Mississauga Hockey League. Coach Ben Cuff reinforced the importance of playing the “Knights Way” by driving the net and forechecking aggressively; listening carefully to the game plan, the Knights came out ready to play and won handily by the score of 6-4.

Later in the day, showing a growing sense of confidence and a strong display of skill, the Knights surged to a 6-0 early lead facing a solid team, the Owen Sound Jr. Attack. But the Attack were a determined opponent and mounted a valiant comeback; the Knights resisted the furious third period charge and emerged victorious (having learned a lesson) by the score of 7-4.

Next up on Saturday were the powerful Waterloo Wolves from the OMHA. The Knights and the Wolves were well rested and both teams came out flying, players forechecking and backchecking aggressively in an entertaining display of determined and exciting hockey. With solid defense and superb goaltending by both teams, the game was a barn-burner and the Knights came up just short losing 3-1, with the third goal by Waterloo in an empty net. A rematch of these two teams seemed very likely.

The final game of the round-robin was against the tournament host team, the Stoney Creek Warriors, whereby the Knights took care of business with a lopsided 9-0 win. With this win, the Knights were on to the semi-finals against the Lorne Park Wild. The Wild were a strong opponent, but the Knights emerged victorious 7-3. Once again, listening carefully to Coach Cuff’s instructions, the players skated very hard, with all three lines driving to the net allowing the scoring to be balanced amongst all the forwards. So onto to the Championship game against the Waterloo Wolves. The teams were both ready and played an incredible game of hockey with fierce intensity and determination, with both goaltenders making several amazing saves.  Despite outshooting the Wolves by a margin of 28-17, the Knights could not finish on many of their chances around the net and the Wolves prevailed 2-1 to earn the championship for the 2018 tournament. Despite coming up just short, the coaching staff and parents were very proud of the determination and hard work exhibited by all the players throughout the tournament. 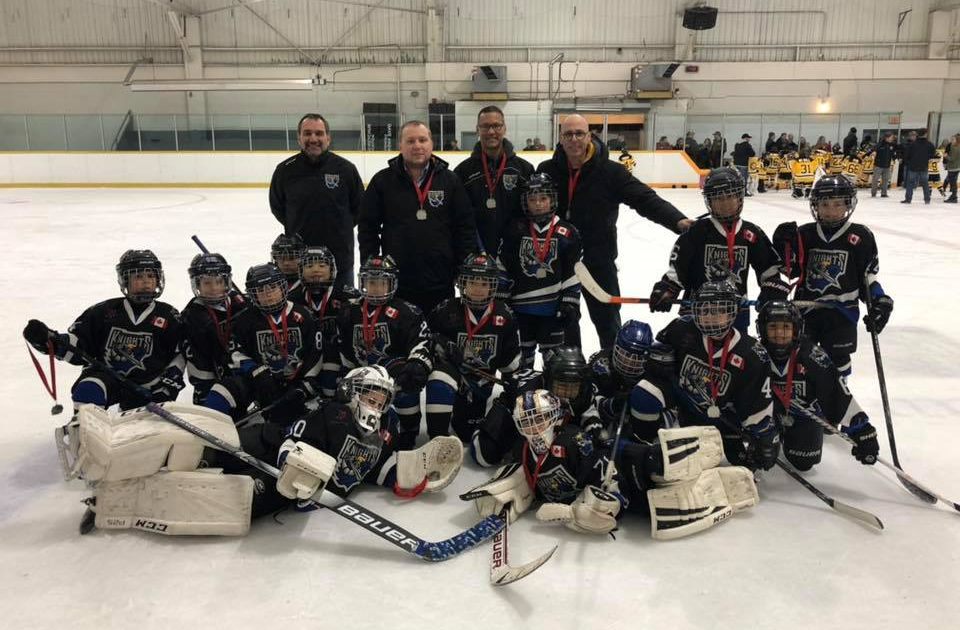