The North York Knights Midget Seniors Select recently entered the Marshall Drewnowsky Memorial Tournament (in the A Division) held between November 15th and 18th. The road to the championship began on Friday morning when the Knights faced the Kingston Panthers. Coach George Della Rocca reinforced the importance of playing 2-way hockey, forechecking and backchecking aggressively. Listening carefully to the game plan, the Knights came out ready to play and won by the score of 4-1.

Next up on Saturday were the Vaughan Rangers Blue. The Knights were well rested and came out flying in an entertaining display of determined hockey. With solid defensive play and superb goaltending, the Knights won handily by a score of 5-0. The final game of the round-robin was against the Vaughan Rangers Red. Perhaps feeling a little overconfident, the Knights had to settle with a 2-2 tie with one of the teams that was eliminated from the round-robin.

With this win however, the Knights were on to the semi-finals against the Vaughan Rangers Blue. In this very exciting rematch, the players skated extremely hard and showed great resiliency, scoring a last minute goal to emerge victorious with a score of 3-2. So the Championship game would now be played against the Barrie Colts. The team was well prepared and played a superb game with great transition passing and some excellent finishing touches around the net to dominate the Colts and win handily by a score of 7-1 to earn the championship for the 2018 tournament. The coaching staff and parents were very proud of the hard work and skilled display of hockey smarts exhibited by all the players throughout the tournament. Great job Midget Senior Knights! 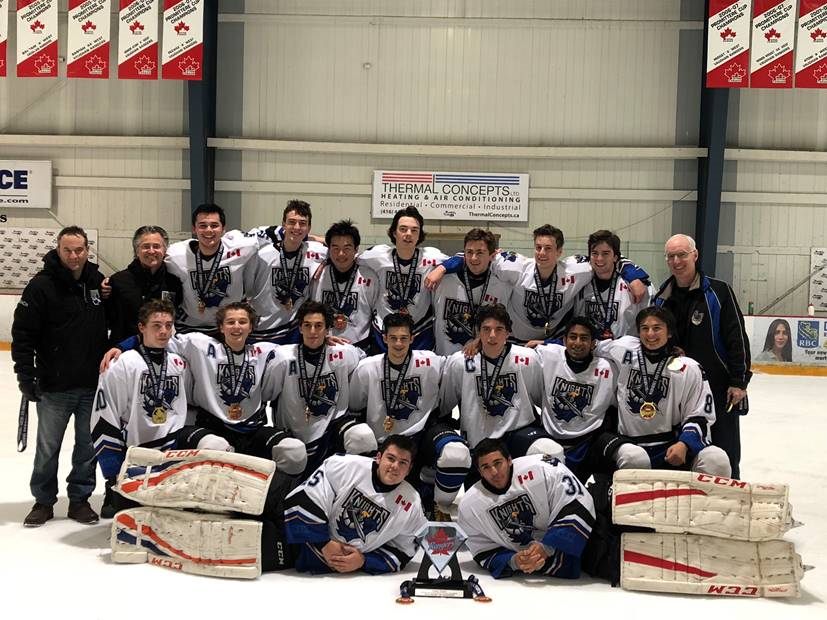