The North York Knights Hockey Association traces its roots to the Catholic Youth Organization (CYO) league. The CYO league had an East and West division with teams representing participating parishes playing each other, usually on Sunday nights. The original participating parishes in the East division were St. Anselm, St. Gabriel, St. Margaret, St. Bonaventure and Blessed Sacrament and their Sunday night games were held in the Don Mills arena. 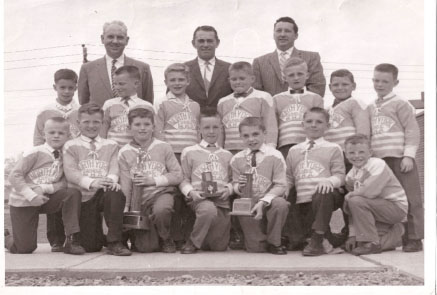 At the start of the 1959-1960 hockey season and for the very first time, an All-Star (also known as Select) team was chosen by coaches Gerry Hanson, Charlie Cerre, John Murphy and John Rogers from among the players of the participating parishes (pictured above). These players formed the original “Knights” team and played in the then Toronto Hockey League (THL) competing against the Toronto Marlies, the Scarborough Lions, Toronto Townships, Humber Valley, Ted Reeve and Faustina teams among others.

The original “Knights” team (pictured below) concluded their first season by winning the All-Ontario championship held in Huntsville, Ontario, capturing the coveted Timmy Tyke crown with a 1-0 victory over the Ted Reeve team.

In the 1960s the Knights of Columbus service organization assumed sponsorship of the hockey league. The league was based on local Catholic parishes and schools that extended through eastern and central North York and into North Toronto, hence the name the North York Knights of Columbus Hockey Association (KOC). The parish churches provided a focal point and the use of rooms and facilities in parish halls as local volunteers provided community service to the youth in their particular area. When the league was formed under this new banner, it was not regarded as a house league but rather as a competitive parish league alternative to the Metro Toronto Hockey League (MTHL, now renamed the GTHL). While some original participating parishes in the league withdrew over the years due to a host of factors, six parishes emerged with strong local executive teams and volunteer bases and became the backbone of the league in the 1970’s, 80’s and 90’s. These six parishes and the traditional colors of their jerseys were Blessed Sacrament (Yonge/Lawrence-black & gold), St. Margaret (Avenue Road/Wilson-royal blue & yellow), St. Bonaventure (Lawrence/Leslie-silver & red), St. Timothy (Don Mills/Sheppard-green), Blessed Trinity (Bayview/Finch-red & black) and St. Edwards (Yonge/Finch-blue & white). 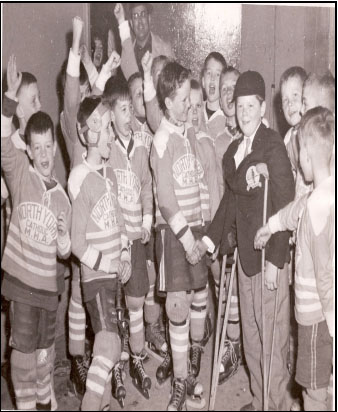 Three important developments occurred over the years reflecting the increasingly diversified cultural make-up of the North York community, competition from other sports and activities for recreational time and the desire to offer an affiliation to the GTHL for players wishing to participate in a more competitive brand of hockey.

First, the North York Knights of Columbus Hockey Association league evolved into a fully non-denominational league with no ties to either the Knights of Columbus or the local Catholic parishes. Players from the many faiths and nationalities have become active participants in the league reflecting the growth of multiculturalism in North York. Further reflecting this change, the league changed its name to the North York Knights Hockey Association. However, wanting to pay tribute to its historical development, the league has maintained the names and colours of the original parishes. The league, which operated for some 50 years as an unincorporated volunteer organization, is now incorporated as a non-profit organization with a Board of Directors and an executive committee. Volunteers, many originally associated with the various parishes in North York, continue to operate the registration process, administer the league’s finances and rules, allocate ice time and balance the competition within the age divisions.

Second, in 2004 the Pleasantview Hockey Association joined forces with the North York Hockey Association adding a strong and active volunteer and player group. Reflecting this development, each division normally includes a “Pleasantview” team in addition to the teams named after the original founding parishes.

Over the years as second and third generations of players and volunteers have returned to the North York Knights Hockey Association, several traditions have been established including a Finals Day where the final championship game for all house league divisions are played at historic St. Michaels College Arena, and a banquet for all the teams at the St. Bonaventure Parish hall where participation trophies are awarded to all teams at the final gathering for the year. However, the most important tradition that has been carried on through the years at the Knights Hockey Association is to offer a fun and rewarding hockey experience where friendships are made and the important lessons of teamwork, sportsmanship and hard work are learned by all participants.