The North York Knights Minor Atom team entered the 18th Annual Don Mills Civitan Thanksgiving Invitational Tournament held from October 6th to October 8th 2017.  With only a handful of pre-season games under their belt since this team formed, the road to the finals was not without hard work, dedication and most of all teamwork.  A combination of great goaltending by the team’s two new goalies and a tremendous amount of passing lifted the Knights to a solid tournament victory. Coaches Leo Abramovich and Ian Henderson could not have been more pleased with the amount of hard work, dedication and team spirit shown by all the players throughout the tournament.

Game #1 – WIN! The Knights played Leaside Red. It seemed right from the start that the teams were fairly evenly matched.  It was a closely fought game with only a narrow margin separating both teams as shown in the final score of 3 – 1.

Game #2 – WIN! The Knights played their second game later in the day against another Leaside team, the Leaside Gold.  The Knights demonstrated a strong focus and drive and most of all sportsmanship and once again emerged victorious by a score of 7-1.

Game #3 – WIN! Next up, the Knights faced the always competitive North Toronto team at Vic Village arena on the Saturday morning. Solid goaltending, aggressive backchecking and forechecking and a well-rounded attack from the forwards produced a decisive win of 6 – 0.

Semi-Finals – WIN!  The Knights played North Toronto later that day for the semi-final round.  With a solid lead early in the game, the Knights displayed excellent teamwork and once again supported by very strong forechecking and backchecking ended up beating North Toronto for the second time in less than 5 hours by the score of 10-4. The Knights were off to the finals.

Finals – WIN!  The Knights faced the Leaside Red in the finals.  The game was exceptionally well played by both teams.  Leaside opened up the score with a goal in the final minute of the first period.  The second period was fiercely fought with plenty of shots on net but an equally impressive display of goaltending skill from both teams. Excellent defense and goaltending on both teams kept the score at 1 – 0 going into the 3rd period. Finally, a goal for the Knights tied the game in the 3rd  period and provided the spark the Coaches Leo and Ian knew would energize the team. With the score even at 1-1, both teams did not let up and the play was back and forth with no team willing to be the first to give up a second goal. Tension was high in the stands for family and friends as this final game became such a nail biter, a real display of effort and determination by all players. Then, the long-awaited second goal came through for the Knights and the battle came to an end with the Knights victorious with a 2 – 1 win!  Congratulations to the North York Knights Minor Atom Select team on their 1st tournament win! Go Knights! 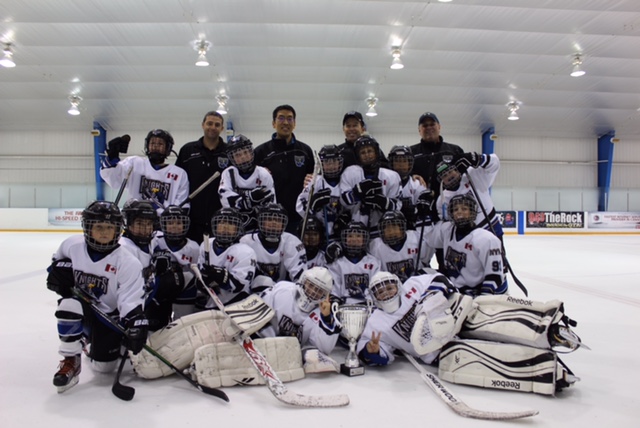