The North York Knights 2008 Novice White team got the season started off in dramatic fashion this weekend. With returning coaches, George, Dan, and Marshall behind the bench the team won the Richmond Hill 17th Annual Early Bird Tournament with a 5-1 record. 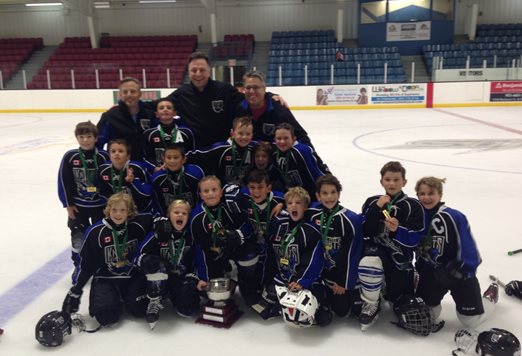 The Novice division featured 13 teams from all over Ontario. The Knights were in a challenging division with teams travelling from Aurora, Clarington, Kingston, and Port Perry. The Knights started the tournament Thursday against the Aurora Tigers and got off to a great start with a 5-1 win. While all team members worked together well, it must be noted the Knights were relying upon call-up goalie from the Minor Novice Knights.

Friday morning proved to be a tougher challenge with the Knights playing the Clarington Toro’s in a hard fought battle. All forward lines worked hard to get the puck to the net but were shut down repeatedly. It finally paid off with a single goal, and with great work in the defensive end and tireless backchecking the team held on for a 1-0 win.

Saturday was a tale of two tapes, with an early morning game against the undefeated Port Perry Predators, and the Kingston Canadians scheduled for the afternoon. The Knights went down a goal early, but fought valiantly. Parents had a lot to cheer for with the puck hitting the crossbar and numerous breakaways, but the puck wouldn’t go in the net! The team continued to practice the basics with backchecking and moving the puck along the boards. Unfortunately the effort ended in a 5-0 loss. The Knights had a few hours to shake off this disappointing effort before their crucial next game.

The afternoon game against the Kingston Canadians was an important one and a win was needed if the Knights were to secure a spot in the semifinals. The Knights came out strong with quick skating and aggressive forechecking. Their determination to win this game was visible and they skated hard the entire game. Extraordinary efforts from the defence denied what appeared to be clear breakaways. The game ended with a 4-0 win and numerous empty water bottles!

Earning their spot into the semifinals also meant the Knights had to face the Port Perry Predators once again. The coaches encouraged the team to keep the positive momentum flowing by speaking to each other while leaving everything they had on the ice. The coaches knew the Knights could compete with this team- and they were right. As soon as the puck dropped the competition started and the fans were cheering loudly for both teams. The Knights “upped” their play in this game, and were more aggressive. This was not going to be a high scoring game as both teams kept stripping the puck in a back and forth game. By the end of the game the Knights had earned a hard fought 2-1 win and a berth in the championship game. The Knight’s coaching staff was very proud to see the team working together, but they knew there was one more important game.

The Nepean Raiders were undefeated and they came out strong in the first period. By the beginning of the second period the Knights were down by 3 goals, and had yet to find the back of the net. The score was not indicative of the effort from the Knights, but rather the sharp shooting and aggressive forechecking by Nepean. The team could have easily backed down but they didn’t. They pushed back, believing they would win. The Knights were not to be denied, and scored 2 quick goals in the second period. An unlucky shorthanded goal put the Knights down by 2 goals again in the third period but fans did not let up, chanting “Go Knights Go”! The resilient Knights clawed back with a 3rd goal to make it a 1 goal game. With just a few minutes left in the period the coaches called a time out to make a final push- and it worked. The Knights scored the tying goal and forced overtime! Coming back from a 3 goal deficit showed great teamwork and determination.

Overtime was played in a sudden death 3 on 3 format. Nepean pressed immediately, but stellar goaltending kept the Knights in the game. The tables turned when a Knights player stripped the puck in the offensive zone and skated toward the net and beat the Nepean goalie on his blocker side with hard wrist shot. The puck was in the net and the Knights became the 2017 Richmond Hill Novice Champions!

Everyone involved is very proud of the team, and is looking forward to the upcoming season and returning to the playoff finals! It was an incredible weekend!