Earlier this year the Knights Novice White team won gold at the Richmond Hill Invitational tournament. The team has kept the streak alive, and once again won gold, but this time at the Blue and Gold Classic (Nottawasaga) tournament in Alliston, Ontario.

The road to gold began on Friday where the Knights faced the Thornhill Rebels. The Knights had not faced this team before, and the coaches reinforced the importance of passing and playing aggressively. The Rebels were a quick skating team and knew the importance of a good pass. The Knights came out ready to play and held on to a 3:1 lead going into the 3rd period. The Rebels had a number of good chances but outstanding goaltending from Matthew Pearl allowed the lead to hold. Late in the third period a quick pass from the corner to the front of the net resulted in a goal and made it a tighter game. Less than three minutes later the Rebels replicated the play and managed to tie it up. The game ended in a tie, and the Knights learned a valuable lesson about always covering the player in front of the net.

Friday night the team was upbeat, and fun was had by kids and parents alike in the “Knights Party Room”. Mini sticks, pizza, and interacting with players from the Knights Blue and Knights Black teams made time fly by. The players were in bed early as they wanted to be well rested for the early morning game on Saturday.

Based on the tournament bracket, the winner of the game on Saturday would advance directly to the finals, and the losing team would need to play another game on Saturday afternoon. The Saturday morning game would be a battle of the “Knights” as the Blue and White teams faced each other. Both teams came out skating well, and a couple of quick goals by the Knights White team put them in front where they never relinquished the lead. A big congratulations were in order for Abraham Isakow, aka “Abes” for his Hat Trick. Well done! A shout out to the Blue team is also required as they skated hard until the last buzzer. 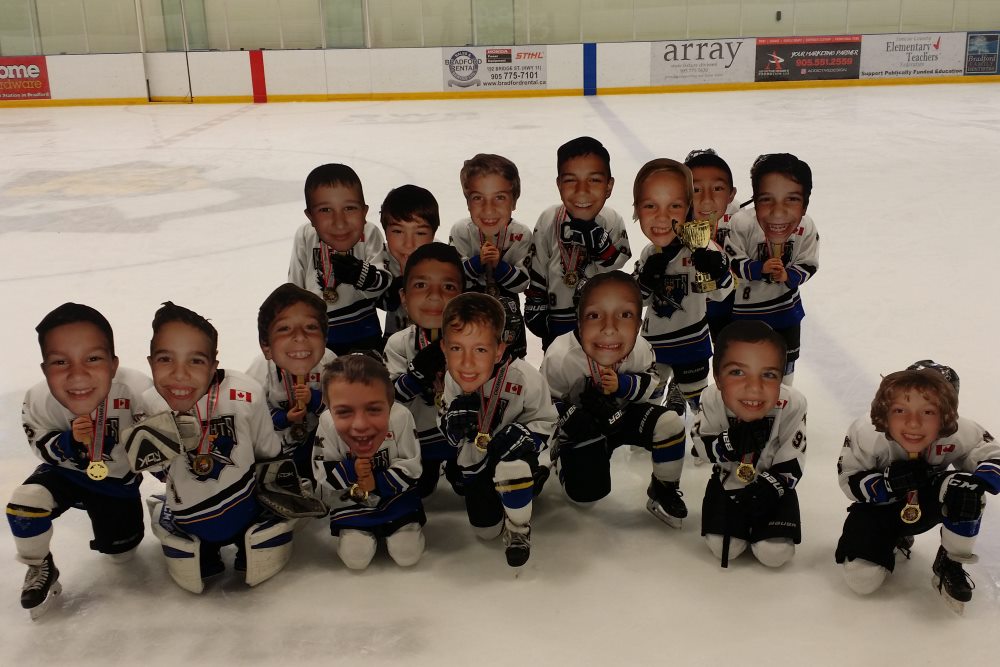 The win meant the Knights White would advance to the finals, and face the Thornhill Rebels once again. The game started off evenly matched with opportunities at both ends. The pace was quick, but the Rebels were not prepared for #65 Niko Rossolatos rushing up the ice weaving in and out of traffic. Niko took a hard wrist shot from inside the right circle where it went top shelf and in the net. The goal was a momentum builder for the Knights as another defender, #81 Blake Givelas followed up in similar fashion and deked the goalie for another goal. Hard work and snaring loose pucks resulted in two other goals by Luke Hristovski, and Freddie Parr. The final result was a 4:1 win for the Knights White and a second gold medal in 2016.

The coaches and parents were extremely proud of the team and how well they supported each other throughout the tournament. This win was a real team effort!