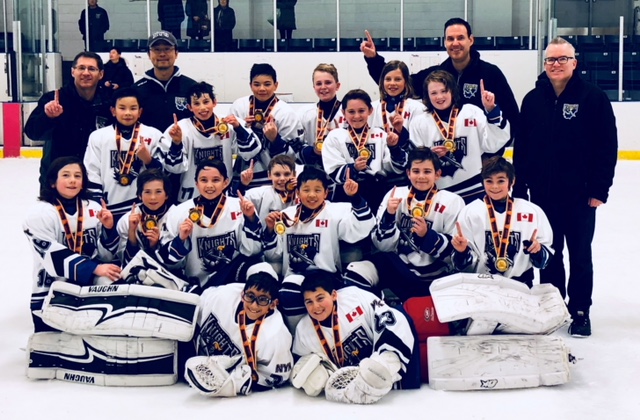 The North York Knights Minor Peewee Black team has a long-standing friendly rivalry with Leaside Gold going back many years. In their first year as a team (Novice) the Knights and Leaside battled it out in the third and deciding game of the Novice Championship with Leaside coming out on top. Since then the two teams have played many competitive matches. So it was with great pride that the Knights MPW Black team were able to defeat Leaside Gold in the finals on route to winning the 2018 Leaside Invitational Tournament.

With no one star, the Knights exhibited true teamwork, as they have done all season, to go undefeated in the tourney.  As Coach Len Corkery states, “The Knights MPW black team are a gritty team that never gives up. We take pride in being known as a tough team to play against. Most of our games this season have been exciting one goal affairs.”

Coming out quickly the Knights scored less than 10 seconds into the game. Taking that lead into the second period Leaside tied it up early. But the Knights scored twice late in the second to make the score 3-1, with one of the goals resulting from an unlucky own-goal off a Leaside defender. Under pressure in the third the Knights held strong to secure the win.

This was a goaltender battle. The Knights outshot their opponent 24-6 but failing to score, the game ended in a tie.

Less than one minute into the game the Knights found themselves down 1-0. But battling back they scored twice before the end of the first to take the lead 2-1. After a hard fought scoreless second period the Knights scored mid-way through the third period to take a 3-1 lead and then, with the goalie pulled, potted an empty-netter to seal the victory 4-1.

With all the pressure on Leaside at their own rink, the Knights came out loose and ready to play. Less than a minute into the game they took the lead on a break-away goal! Then made the score 2-0 towards the end of the first on a scramble in the slot. The game remained 2-0 with many back and forth chances until late into the game. With approximately 90 seconds left on the clock, and their goalie pulled, Leaside made it 2-1 on a shot that ricocheted over the goalie’s head and into the net. The last minute and a half saw them pull their goalie again resulting in the Knights being penned in their own zone where several mad scrambles in the crease ensued. But the Knights held on to secure the 2-1 win and the championship!