Congratulations to the Minor Novice Knights Black team coached by Davis Yoo who defeated the Kitchener Mighty Ducks 5-1 in the final game to win the Bradford Bulldogs Blue & Gold Classic Hockey Tournament that was held December 4-6th in Bradford, Ontario.  The Minor Novice White team coached by Marshall Matias also participated in the same tournament and performed admirably winning 2-1 over the Oakville Blue Bombers in the Quarter Finals before losing 5-0 in the Semi-Finals to the Knights Black team. Most games took place at the Centre Ice Sportsplex at The Nottawasaga Resort in Alliston. 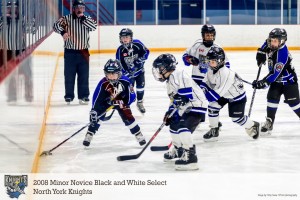 Both Knights Minor Novice (2008) Select teams participated in the Bradford Bulldogs Blue & Gold Classic Hockey Tournament that was held December 4-6th in Bradford, Ontario. Both teams travelled to the Nottawasaga Resort and spent the weekend together enjoying some great hockey, team bonding and family time. The two teams had over 100 players/siblings/parents attend the tournament and shared a large party room at the resort the entire weekend allowing for many games of mini-sticks. 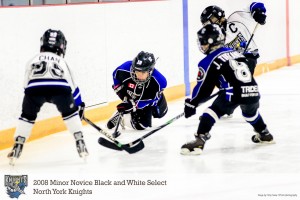 The Minor Novice Knights Black team coached by Davis Yoo entered the Round Robin as favourites and true to form promptly dispatched the Thornhill Rebels (Black) by a score of 6-1 and the George Bell Titans (White) with a shutout win of 4-0. This strong showing resulted in the team having a bye to the Semi-Finals to be held at Centre Ice Sportsplex at The Nottawasaga Resort in Alliston. Meanwhile, the Minor Novice Knights White team coached by Marshall Matias tied the Oakville Blue Bombers 2-2 in their first game, but lost 5-4 to the Whitby Wildcats Select in a very tightly contested game. This meant that the White team needed to play in the Quarter-Finals on Saturday morning once again versus the dreaded Oakville Blue Bombers. Responding well to Coach Marshall’s inspirational speech before the game, the players left everything on the ice and pulled off a terrific win of 2-1 in overtime with the players skating in a 4-on-4 situation to end the game. 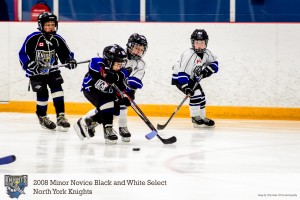 On Sunday morning, the White team knew that they had a huge challenge ahead as they faced many of their Knights House League friends who play for the Minor Novice Black team. The two Knights teams faced off with the Black team emerging victorious with the final score recorded as 5-0. One of the photos shows the Black and White teams posing for a combined Knights “family” photo following the Semi-Finals. In the Finals, the Knights Black team put all of Coach Yoo’s teaching into effect and used team speed, smart passing, a tenacious forecheck and superb goaltending to defeat the Kitchener Mighty Ducks 5-1 in the final game to win the tournament.

Congratulations on both the Minor Novice Black and White teams for a great display of Knights hockey!