The North York Knights Midget Seniors Select recently entered the 2019 Canadian Cup Tournament (in the Henri Richard Division) held in Montreal between February 15th and 17th. This was a special tournament for the players as it would be the last one as a team – but according to Coach George Della Rocca the weekend exceeded all expectations. The players in fact accomplished the two things they wanted from this tournament: 1. have fun – first and foremost; and 2. win the tournament (if not too “tired”). The fun part was easy, given the camaraderie, the beautiful hotel and the great location in downtown Montreal. The winning part was a lot harder. Other than an injury sustained by a player, Coach George believes this may have been the best “away” tournament he has ever been part of in all his years of coaching given how well the players got along and how respectful they were throughout the weekend. Importantly, the players had to put forward an amazing performance of going undefeated over 5 consecutive games as any loss in this tournament meant that the team could not make the finals – so every game was a “must-win-or-at-least-tie” game…. the pressure was always on. Every game turned out to be a nail-biter – but under pressure the players showed the true character of this Knights team and consistently came through with the big play, getting the goal when needed, making the impossible save or the incredible defensive effort at just the right time. What a memorable tournament!

The road to the championship began on Friday morning when the Knights faced the St. Bruno Condors. Coach George reinforced the importance of playing 2-way hockey, forechecking and backchecking aggressively. Listening carefully to the game plan, the Knights came out ready to play and won a hard-fought game by the score of 3-1. Later that afternoon, the Knights displayed impressive teamwork against the West Hill Golden Hawks and won handily by a score of 4-1 with great transition passing and some excellent finishing touches around the net. Next up on Saturday were the York Mills Rangers. The Knights were well rested and played determined hockey against a long-time and evenly matched rival and tied the game 4-4. The final game of the round-robin was against the Warren Park Eagles where the winner would make the finals. Fantastic goaltending on several breakaways and on way too many 2 on 1’s allowed the Knights to shoulder the storm with incredible resilience and author an amazing comeback win of 4-3. With this win, the Knights were on to the finals against the York Mills Rangers. In this very exciting rematch, the players skated extremely hard, were superb on penalty killing while goaltending was once again breath-taking and the team emerged victorious after a heart-stopping overtime shootout win of 2-1.  As Coach George stated: “this group of players just seems to know how to win. And when they decide that is what they really want, there are few (if any) who can stop them”. Congratulations Midget Senior Knights on a great team championship! (And never forget the team dinner at Moretti’s Pizzeria or the tacos and cannoli at 2 am on Sunday made by the Indian owner of the Don Taco Mexican restaurant on Rue St. Catherine…now that is a hockey memory!!) 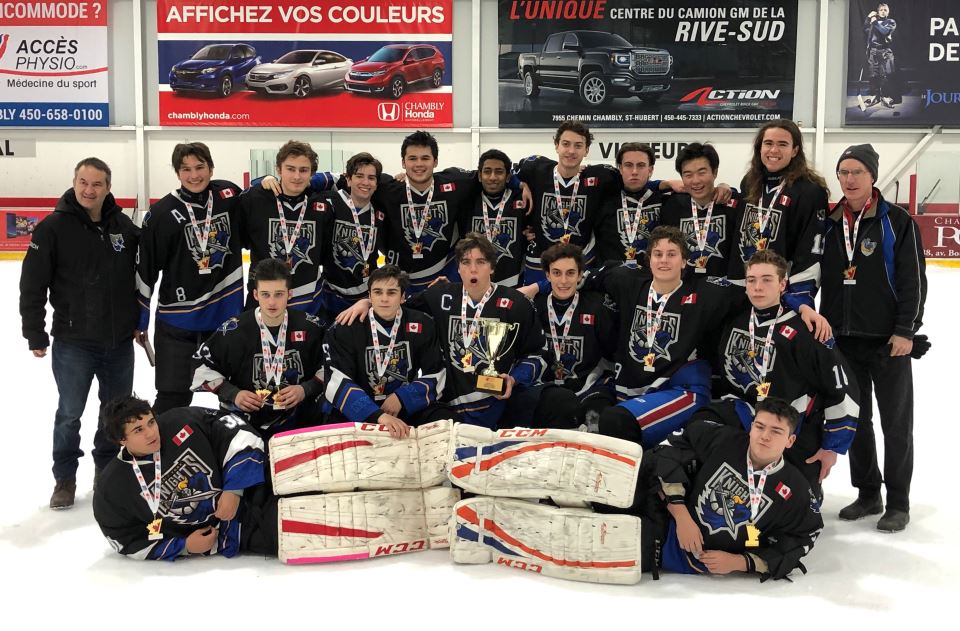