The North York Knights Minor Midget Select recently entered the 2019 Valentine’s Day Tournament (in Division 1) hosted by the Scarborough Ice Raiders and held between February 7th and 10th. The team was very determined to avenge the crushing loss suffered via shootout in the final of the same tournament last year. The road to the championship began on Friday morning when the Knights faced the Oakville Gryphons. Coach Brian McMillan reinforced the importance of playing 2-way hockey, forechecking and backchecking aggressively. Listening carefully to the game plan, the Knights came out ready to play and won by the score of 4-2.

Next up on Saturday were the Scarborough Ice Raiders, the tournament hosts and the victors over the Knights in last year’s final. The Knights were well rested and came out flying but the teams were evenly matched. In a spirited and entertaining display of determined hockey with solid defensive play and superb goaltending, the teams battled to a 1-1 tie. A rematch of these two teams seemed very likely once again. The final game of the round-robin was against the Willowdale Blackhawks. With solid defense and solid goaltending once again for both teams, the game was a barn-burner and the Knights squeak by with a 2-1 victory.

With a record of two wins and one tie, the Knights were on to the finals against the dreaded Scarborough Ice Raiders. This was going to be a very exciting rematch of both the earlier game in this year’s tournament and of last year’s final; so players, coaches and parents expected a fiercely fought battle. Prior to the start of the final game, Coach McMillan sensed how nervous all the players were thinking back to last year’s loss in the finals. In his pre-game speech Coach Brian emphasized the need to stay loose and to focus on having a solid team effort; this was a time to play unselfishly and to put the team first on every single shift. The pep talk worked and the players left the room confident that they had the talent, energy and determination to overcome the challenge. The first period was a solid effort whereby the Knights won the one-on-one battles and outplayed the Ice Raiders, but the score remained tied at 0-0. The second period was even more intense but the Knights took advantage of a juicy rebound in the crease and scored on a quick shot to the top corner of the net.  The Ice Raiders mounted a furious comeback charge to try and tie  the game but time and time again the Knights goaltender stymied their attack with brilliant saves resulting in the period ending with a score of 1-0 for the Knights. In the third period, the Knights executed the game plan to perfection and were absolutely tenacious in their forechecking and very aggressive on the backcheck with the goaltender confidently handling all shots by the Raiders. Finally, with only 90 seconds left on the clock and the opponent’s goaltender pulled, the Knights winger won his ferocious ballet at the blue line, gained possession of the puck and wired the puck into the empty net to seal the win with a score of 2-0. How sweet was the taste of winning this game and the championship knowing how difficult it had been to accept the loss last year! The players on the Knights Minor Midget team and all the coaches are to be congratulated on their tenacity and determination in earning this well-deserved and particularly satisfying victory. Well done Minor Midget Knights!! 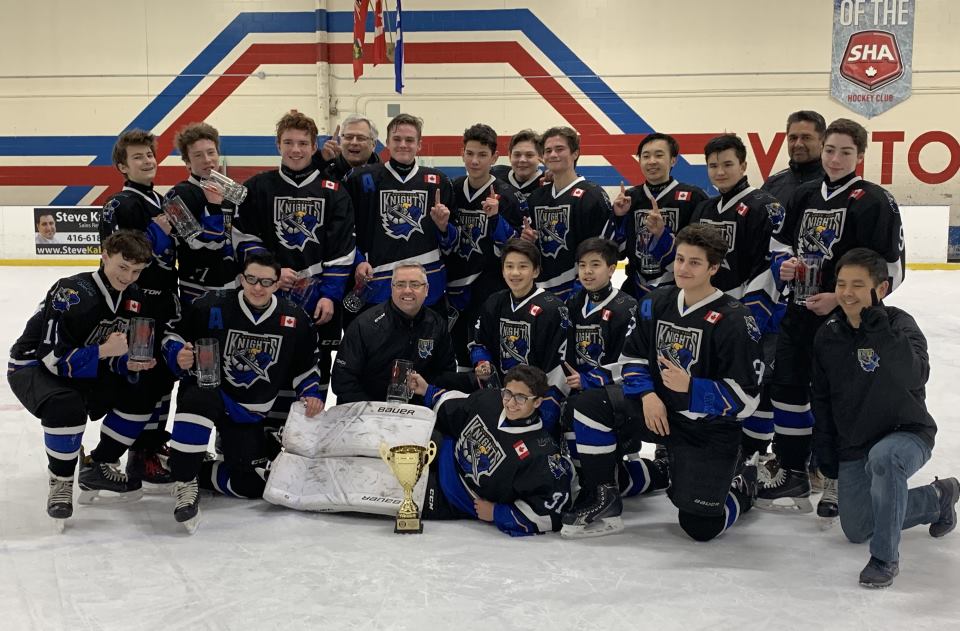