Congratulations to the PeeWee Knights team coached by Brian McMillan who defeated the Warren Park Eagles 4-3 in dramatic fashion in overtime to win the 2016 George Bell Select Tournament held on February 19th -21st. 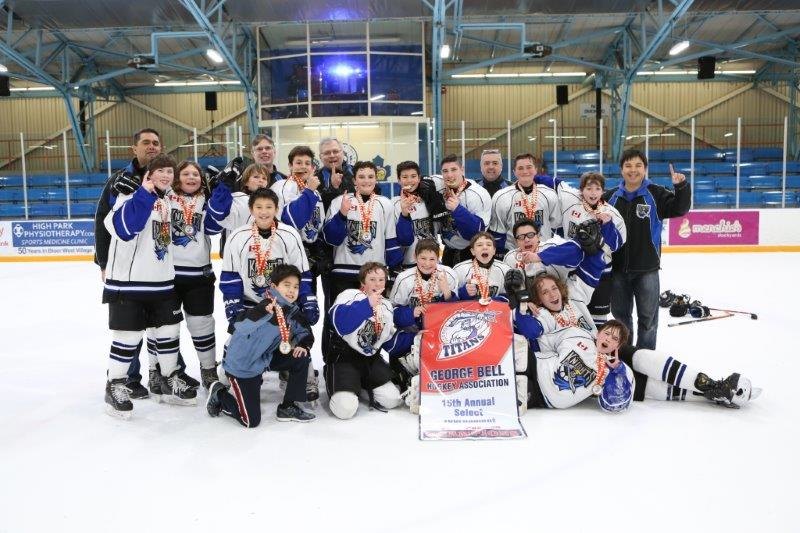 In the semi-final game the Knights, who played in Tier 3 in the Winter season, faced the Tier 2 West Mall Lightning. The game was a closely fought struggle with aggressive forechecking and backchecking as both teams were determined to reach the final game. Both goaltenders put on impressive performances and the game ended in a 2-2 tie. Despite end-to-end rushes during the overtime period, outstanding saves by the goaltenders once gain made it impossible to settle the match resulting in the dreaded shootout. Three shooters from each team were designated by each coach to try to end the game. In the shootout, the Knights goalie was spectacular and stoned all three “Ligtning-shooters” with incredible saves. Meanwhile, the Knights buried two of their three attempts and thus won the game 3-2 and earned the right to meet the Warren Park Eagles in the finals.

With parents and siblings cheering on wildly, the Knights followed Coach Brian’s instructions carefully and used their speed, tenacious backchecking, timely scoring and brilliant goaltending to battle the Eagles to a 3-3 tie. Overtime was once again needed but this time the Knights were ready. Within two minutes, the hard-charging Knights forwards attacked and with a high shot to the goaltender’s glove side, the Knights scored a brilliant goal to beat the Eagles 4-3.

What a thrill and great experience for the players and coaches! The hard work and determination needed to win the 15th annual George Bell Tournament will undoubtedly be a lifelong memory. Congratulations to Coach Brian and all the players on the PeeWee team for a great display of determination and quality Knights hockey!